My Maiden Speech in Parliament 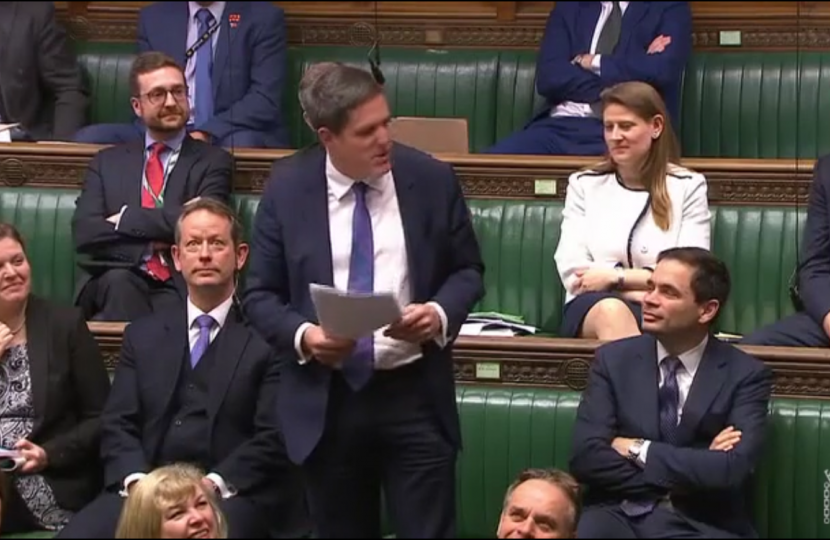 Today I was honoured and delighted to deliver my maiden speech in the House of Commons during the debate on the government's new Agriculture Bill.  I feel fortunate to represent a constituency that has a rich history and a great future in farming.  I grew up on a small farm in the South of the constituency and rural matters are close to my heart. You can see a full transcript of my speech below.

"The greatest thing about speaking in this debate on agriculture policy is that we are having it at all. The last Agriculture Bill passed by this House was in 1947. That means that no one under the age of 93 has had the chance to elect an MP who could vote on farming policy—until now.

"It is a special honour to speak here on behalf of my home constituency, South Cambridgeshire. It is where I grew up, went to school and got married. It has lots of farms, one of which I grew up on. My predecessor, Heidi Allen, represented the constituency with great commitment, great passion—and great political versatility. She was diligent in attending local parish meetings and famous for dancing into the night at local events, and I certainly will not be able to follow in those dancing shoes. We do not agree on everything, but we do agree that it is a fabulous constituency. One resident told me that South Cambs has more Nobel prizes than France and that is a fact too good to check. [Laughter.] It is true—apparently. It is certainly true that just one building, the Laboratory of Molecular Biology, has produced 12 Nobel prize winners itself. We also have the global headquarters of AstraZeneca, one of the biggest drug companies in the world. We have Addenbrooke’s hospital, one of the top hospitals in the country, and one where I had my life saved when I had my appendix out. It has been joined by the newly opened Royal Papworth Hospital, the top heart hospital in the UK. Other MPs have urged Members to visit their constituencies if they want a great day out. My hon. Friends, I urge you to visit my constituency if you want a great heart transplant.

"The Government are planning a new children’s hospital and a cancer hospital. It is proof of our Government’s commitment to the NHS. We are the life science capital not just of the UK, but of the world. Even tiny villages boast their own science parks. Take Hinxton, which now has the Wellcome Sanger Institute, leading the world on gene sequencing. It is now decoding the genes of 500,000 people, starting a revolution in personalised medicine.

"But the traditional heart of my constituency is rural. Farmers are some of the most affected by EU membership. Many get subsidies from the EU and many export to it, but the overwhelming majority of farmers I met were pro Brexit. There is a good reason for that: the common agricultural policy is not fit for purpose. Billions of pounds of taxpayers’ money are given to people basically for owning land, and with great subsidies come great rules—600 pages of them. There are 15 pages alone defining when a hedge is not a hedge. Farmers have to employ administrators just to help them survive the red tape.

"I know that Brexit has its challenges. I spent five years as the chief executive of the British Bankers’ Association, which included negotiating Brexit with the EU institutions—the European Parliament, the Council and the Commission. But on CAP, we can all agree. The left-wing Guardian columnist, George Monbiot—not often quoted by Conservative MPs—wrote recently: “I’m a remainer, but there’s one result of Brexit I can’t wait to see: leaving the EU’s common agricultural policy.”

"As we heard earlier this evening, Labour has long opposed CAP. I remember meeting the right hon. Member for Derby South (Margaret Beckett) 20 years ago when she was Environment Secretary railing against the CAP.

"As Europe correspondent of The Times newspaper, I covered the European summit where Tony Blair gave up a portion of the British rebate, which had been so hard fought for by Margaret Thatcher—hooray. He gave it up in return for a promise from Jacques Chirac that France would think about reforming the CAP. I can tell Members that the French President did not think very hard.

"I am a former environment correspondent of The Observer and of The Times, and I now chair the all-party group on the environment. Green issues are close to my heart. Most environment groups, most farmers and all major political parties have long wanted to scrap the CAP, but there was nothing that we could do about it. I found it an affront to democracy, so nothing gives me greater pleasure than voting for this Bill. It uses public money for public goods, such as improving the environment and animal welfare.

"The Royal Society for the Protection of Birds has shown what can be achieved at its Hope Farm in my constituency, where environmentally friendly farming has led to a 1,500% increase in overwintering birds. This Bill has very wide support from farmers’ groups and from environmental groups. Certainly, there are questions to ask. It is good to have a seven-year transition from one scheme to the other, but what is the profile of that transition? Should there be a food security review every ​five years or every year to start with? The great thing is that we can now debate this and decide this. Voters can make their views heard and we will listen. It is part of the renaissance of British democracy.

"Farming still faces challenges. It is essential that, when farmers export, they do so with a level playing field. They must not be undermined by competitors who cut costs by cutting environmental or animal welfare standards. The Bill does mean that many farmers will have to change the way that they do things, but the farmers I have spoken to are up for the challenge. They welcome being paid to protect the environment. Many are already diversifying what they do. Last week, I met a farmer who had started producing crisps and is now exporting them by the container load to America. Other farmers are improving productivity by automating. One company in my constituency, Dogtooth, is leading the world in producing artificially intelligent strawberry picking robots. It is one of many agritech companies in South Cambridgeshire that are unleashing a new agricultural revolution.

"Yes, there are challenges ahead that need managing, but we must have confidence in ourselves as a country. One millennial said to me recently that we could not possibly survive outside the EU, and I was left thinking, “How have we come to think so little of ourselves?” There are roughly 200 countries in the world, and only 27 are part of an international government that makes laws for each other. No one else has followed the EU, so there are roughly 170 countries that fully make their own laws and of those we are the fourth biggest economically—in the top 2%. If we cannot survive, what about the 98% of fully independent countries that are economically smaller than us? That includes such successes as Canada, Australia, Singapore and South Korea.

"I am half Norwegian, part Irish, part French and married to a Canadian. I have lived overseas and worked and travelled in more than 70 countries. Often I see Britain as others see us—an extraordinary country capable of extraordinary things. But how has such a great country lost so much of his mojo?

"We have left the EU. The new political divide is no longer between Brexiteers and remainers; it is between optimists and pessimists. Whatever side of the argument you are on, we must now come together and work together to embrace the opportunities. It starts here with this agricultural policy. I commend this Bill to the House."