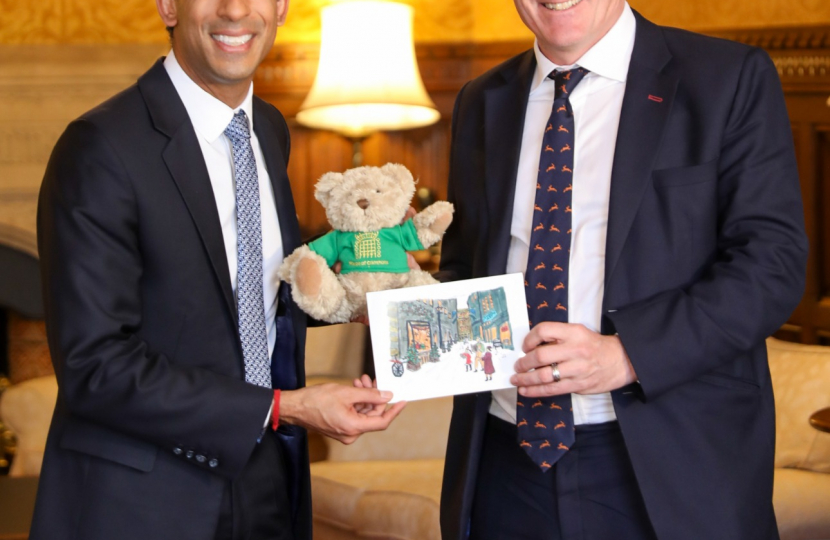 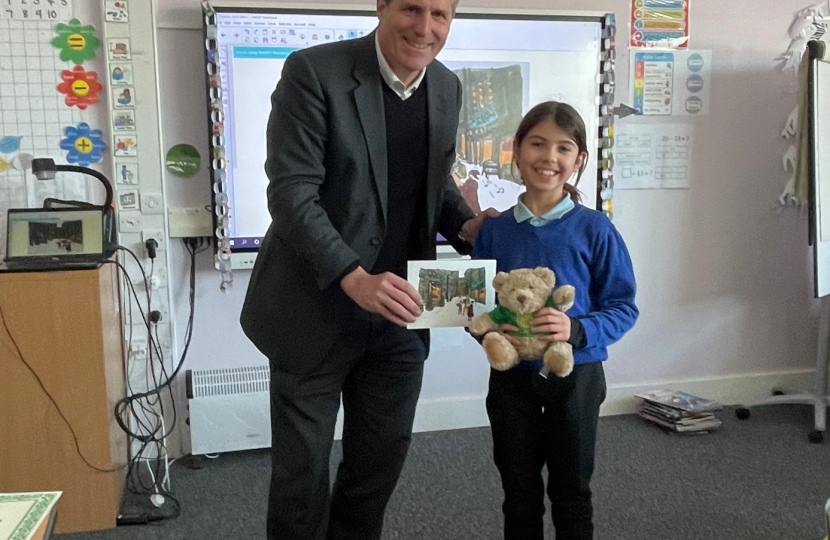 Anthony visited a Cambridge school (Friday 15 December) to present an award to the winner of his Christmas Card competition.

Anthony visited The Queen Emma Primary School in Queen Edith’s to congratulate nine-year-old Sofia Sanchez, who entered this year’s competition to design a card on the theme of ‘What Christmas means to me’.

The competition, which Mr Browne has run annually since 2019, was open to all local primary schools.

Sofia’s design features on the front of Anthony’s card, which has since been sent to almost a thousand constituents, organisations, charities, and businesses right across South Cambridgeshire and to many senior national politicians, including the Prime Minister.

After carefully judging all the entries, Sofia’s design of a festive street saw off stiff competition to take the top prize. Sofia entered the card with the message “Christmas to me means spreading the Christmas joy to everyone around us” – the message features on the inside of the card. Also commended on the back of the card were entries from Duxford, Hardwick and Caldecote.

Anthony presented Sofia with her winning card and a Houses of Parliament Teddy Bear named Barry. Barry’s journey to South Cambs took him into the Chamber of the House of Commons, where he was referenced in a debate, and on a visit to the picture of the Prime Minister, who took a picture with Barry and the winning card.

Anthony commented: "I agree with Sofia, Christmas should be about spreading joy! I hope her card will bring a smile to residents across the constituency. She really captured Cambridge at Christmas time. The Prime Minister Rishi Sunak was also very impressed with her picture, praising it when I showed it to him.”

“I was very impressed by all the entries I received this year from the children of South Cambridgeshire. Seeing all those drawings of how the next generation view Christmas meant a lot to me and goes to show how important it is that we protect that vision of our community. My thanks to all the children who took part, and to their teachers and parents who encouraged them.”