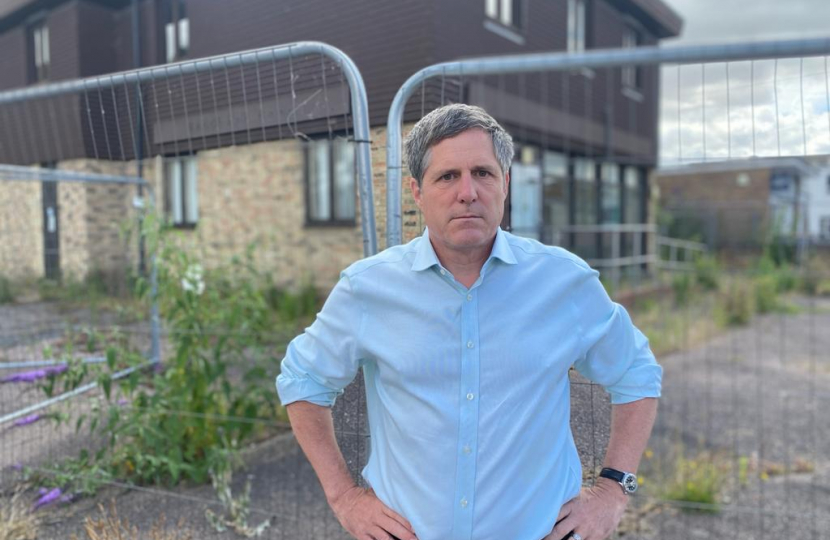 Anthony is campaigning to restore the former Barclays Bank site in Sawston in response to resident’s anger over the building’s state of disuse.

Having been abandoned for almost a decade, the former Barclays Bank site was the subject of many doorstep conversations in response to Mr Browne’s recent residents survey. Others commented on his online form, saying:

The site, located at 21 High Street, Sawston, is currently owned by a company registered overseas and is reported to not currently be paying business rates for the site. A previous attempt to lease the site to Sainsbury’s is said to have concluded, with the supermarket chain cutting ties with the site last year.

Having written to the owners of the site asking them to use or sell the property, Mr Browne then challenged Cllr Bridget Smith, Leader of the majority Liberal Democrat group on the District Council, to consider enforcement action or financial disincentives for the owners. Failing this, Mr Browne urged the council to work towards a Compulsory Purchase Order or Empty Dwelling Management Order to take direct control of the site.

Mr Browne also submitted a question to the Secretary of State for Levelling Up, Housing and Communities to urge the Government to help local authority to deal with such issues. He is supporting measures such as High Street Rental Auctions to incentivise cooperation between landlords and local authorities, and the Register of Overseas Entities, which is being developed by the Department for Business, Energy, and Industrial Strategy to gather information on overseas landlords. The question and response can be found here.

Mr Browne commented: “It is time we removed this disused eyesore tarnishing the heart of one of our largest, most vibrant communities.

“I spoke to hundreds of residents and survey respondents told me how proud they are of their High Street. The bank is the exception. I have reached out to the owners, to the council, and to Government to find a solution to this nine-year-old problem.

Before residents are able to commiserate the tenth anniversary of this blight on their town centre, the responsible parties can and must act.”