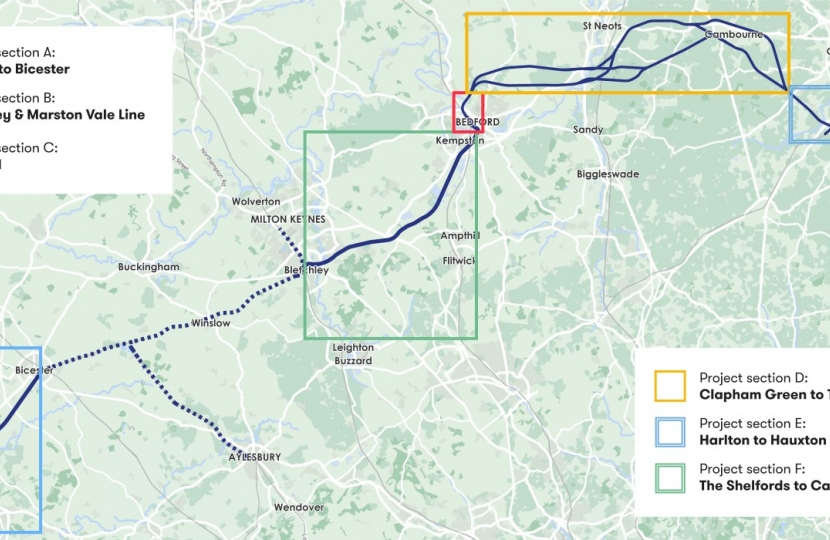 What we have before us today is a classic case of two steps forward, one step back.

In many ways, I can already see the impact of our community’s campaigns. In particular, the news that a station to the north of Cambourne is now not only being considered but has become part of East-West Rail’s emerging preference shows what can be accomplished with proper scrutiny. This is something I have been deeply involved with, including writing letters and taking meetings with ministers, and it is good to see that East-West Rail can and will listen.

There has also been clear consideration of the impact on communities, people, and property. I welcome the exclusion of any option which would lead to the demolition of homes in the Shelfords, which has been a cause for concern locally. It is a shame that the same thinking did not extend to the call for a clear consultation on route alignment.

While residents finally have the reassurance that a northern route alignment has been assessed, including a backcheck with proper consideration of a station north of Cambourne and the chance to comment on this proposal, it is clear that East-West Rail does not consider this a credible option. I am deeply disappointed that there is not a more open consultation presenting a clear choice between routes. Residents must not only be fully informed on such matters but free to weigh up the pros and cons of any scenario to decide for themselves.

I also recognise the concerns residents in Harston, Hauxton and Haslingfield may have regarding the potential impact of new railway infrastructure proposed as part of the southern route, particularly the potential new railway junction near Harston. This will need very careful consideration and I will be looking to engage personally with residents and campaigners on this matter while urging them to read and respond to this consultation.

I will be taking meetings with East-West Rail, campaign groups, and parish councils over the next ten weeks. I know from my own surveys that our community will engage with this debate, and I hope everyone in South Cambridgeshire will offer their views, as I will certainly be offering mine.

To take find out more or part in the consultation, click here.