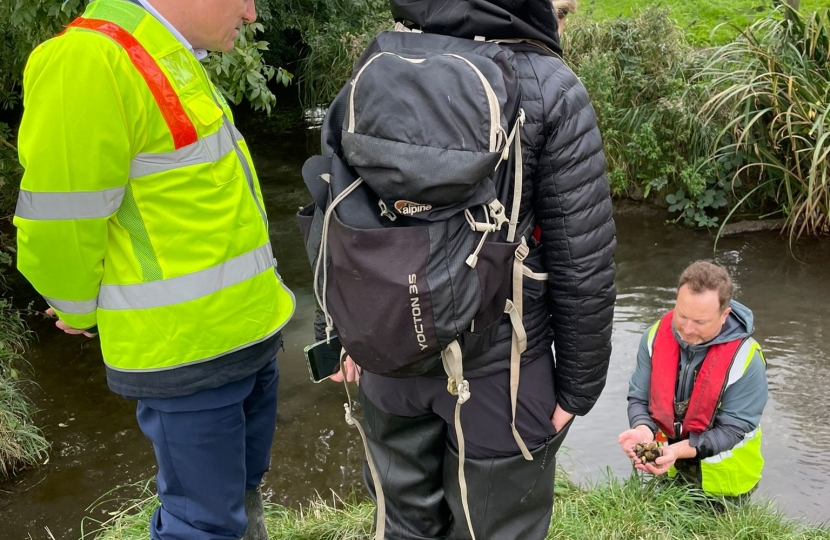 As residents know, I care passionately about the state of our local streams and rivers and have been campaigning hard to ensure they are clean and healthy. As part of that, I am strongly opposed to storm overflows containing untreated sewerage discharging into rivers. It is disgusting and environmentally damaging and needs to end.

That is why I am glad the Government is introducing a comprehensive package of measures to eliminate the discharge of untreated sewerage into rivers, and I was delighted to vote for them as part of the Environment Bill. I detail below how we are doing that.

However, I will begin by commenting on Lords’ Amendment 45 to the Environment Bill, which was voted on this week, and about which a number of constituents have contacted me.

The Government has inserted a range of amendments to the Environment Bill to address the concerns I and other MPs have raised about storm overflows. I was pleased to vote in support of Amendment (a) to Lords Amendment 45, which passed by a margin of 265 votes for to 202 votes against.

Concerns have been raised that section 141A, tabled by the Duke of Wellington in the House of Lords, was removed from Amendment 45. Section 141A sought to place a new duty on sewerage undertakers in England and Wales to demonstrate progressive reductions in the harm caused by discharges of untreated sewage.

This all sounds admirable, and indeed is something I support in principle. But the trouble is that the Duke’s amendment came with no plan as to how this can be delivered and no impact assessment whatsoever.

Some might argue that a plan is not essential, that one can be formulated afterwards. I would be sympathetic to this point of view if we were talking about a simple, inexpensive endeavour. But in eliminating storm overflows, we are talking about transforming a system that has operated since the Victorian era.

The practical problem is that across the UK there is just one system of pipes that takes both rainwater and sewerage from homes, rather than separate systems for rainwater and for sewerage. When there are storms, so much rainwater enters the sewerage system that it cannot be contained and needs to flow somewhere. If we didn’t have storm overflows into the rivers, then there would be flooding with raw sewerage, which can be extremely harrowing for households. Preventing the discharge of untreated sewerage during storms is a major change to infrastructure in almost every town and village in the country. Some mitigations such as storm tanks can reduce discharges but don’t usually eliminate them.

The preliminary cost of this national infrastructure change is estimated to be anywhere between £150 billion and £650 billion. To put those figures in perspective, £150 billion is more than the entire schools, policing and defence budgets put together, and £650 billion is nearly twice what has been spent combatting the Coronavirus pandemic. It would bankrupt most water companies unless consumers or taxpayers contribute. The cost works out at between about £5,000 and £20,000 per household.

The Government’s view was that it would have been irresponsible to have inserted this section in the Bill given that it was not backed by a detailed plan and thorough impact assessment. It would have been the equivalent of signing a blank check on behalf of billpayers.

Stopping sewerage discharge into rivers is so complex that in previous decades, no government (Conservative, Labour or coalition) has tackled it. But now we are.

I was pleased to support the other amendments to the Environment Bill relating to storm overflows (including the rest of Amendment 45).

This is absolutely essential, as it will provide Parliament and the public with up-front, clear and comprehensive information on the cost and impact of eliminating storm overflows. Between the Government plan on storm overflows and the new elimination report, we will fully understand precisely how we can best tackle storm overflows.

So while setting out lofty aspirations is all well and good, what we really need to do is the long, detailed, practical work required to understand how we can deliver on these ambitions. It is not glamorous or headline-grabbing. But it is the effective action we need to deliver for local residents.

Please do not think that the Environment Bill only legislates for the production of plans on tackling storm overflows, however vital these no doubt are. I was pleased to support amendments to the Bill which take firm and immediate action to tackle storm overflows in the short-term. This includes:

Outside of the Bill, Ministers have made their expectations crystal clear in DEFRA’s draft Strategic Policy Statement to Ofwat. For the first time, the Government will be telling the industry’s regulator that it expects water companies to take steps to “significantly reduce storm overflows”, and that it expects funding to be approved for them to do so.

Ministers will also undertake a review of legislation that would require Sustainable Drainage Systems to be constructed to ministerial standards on new developments, reducing the pressure on the sewage system.

All of these measures are informed by the work of the Storm Overflows Task Force, which Defra established in August 2020 to bring together key stakeholders from the water industry, environmental NGOs, regulators, and Government in order to drive progress in reducing sewage discharges. The Taskforce has agreed a goal to eliminate harm from storm overflows.

I hope this information is helpful and reassures readers that any suggestion that MPs are not taking firm action on storm overflows is false. A majority of MPs including myself voted in favour of taking a range of immediate steps to address storm overflows, together with a legal duty on government to produce detailed and costed plans for reducing and eliminating storm overflows entirely.

After decades of avoiding this difficult problem, we are finally tackling it. Hurrah!