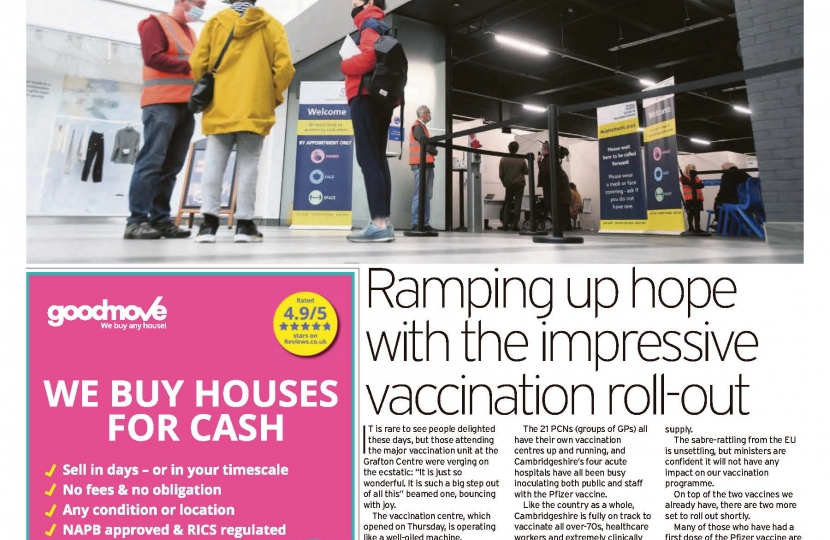 It is rare to see people delighted these days, but those attending the major vaccination unit at the Grafton Centre were verging on the ecstatic: “It is just so wonderful. It is such a big step out of all this” beamed one, bouncing with joy.

The vaccination centre, which opened on Thursday, is operating like a well-oiled machine. Set up by the NHS, and staffed with volunteer firefighters, soldiers, civilian volunteers and redeployed health staff, all working with a sense of joint mission, it can give the AstraZeneca vaccine to over 500 people a day. I pay tribute to all those who have made it happen – and particularly the operations manager, Jacqui Taylor, who has been overseeing it.

After a slow start, the vaccination programme across Cambridgeshire has now ramped up massively in the past fortnight. Well over 80% of all over-80s have had their jab, as well as residential care homes. The 21 PCNs (groups of GPs) all have their own vaccination centres up and running, and Cambridgeshire’s four acute hospitals have all been busy inoculating both public and staff with the Pfizer vaccine. Like the country as a whole, Cambridgeshire is fully on track to vaccinate all over-70s, healthcare workers and extremely clinically vulnerable by February 15.

After that, the target is to vaccinate all over-50s by the end of March. Frontline key workers, including teachers, will be prioritised. The only major constraint – nationally and locally – is supply of vaccines. These have been lumpy, with big deliveries, followed by scarcity.

I have been in close contact with local NHS, national NHS and Nadhim Zahawi, the vaccines minister, to try to get more predictability. The trouble is that at this early stage of production, the drugs’ manufacturers themselves are unable to deliver a constant supply. The sabre-rattling from the EU is unsettling, but ministers are confident it will not have any impact on our vaccination programme. On top of the two vaccines we already have, there are two more set to roll out shortly.

Many of those who have had a first dose of the Pfizer vaccine are worried they won’t get the second dose, but the NHS has got a full plan taking into account supply uncertainties, to roll out the second doses from March, including for Pfizer. I am confident we are through the worst. The level of deaths in recent weeks has been numbingly shocking, but they are now coming down, as are the rates of infection and hospitalisation.

That downward trend is set to continue rapidly. It is too early to lift restrictions just yet, but the next big challenge is getting the schools to re-open safely, as quickly as possible, and the rest of the country to follow.

Then we can all smile again.