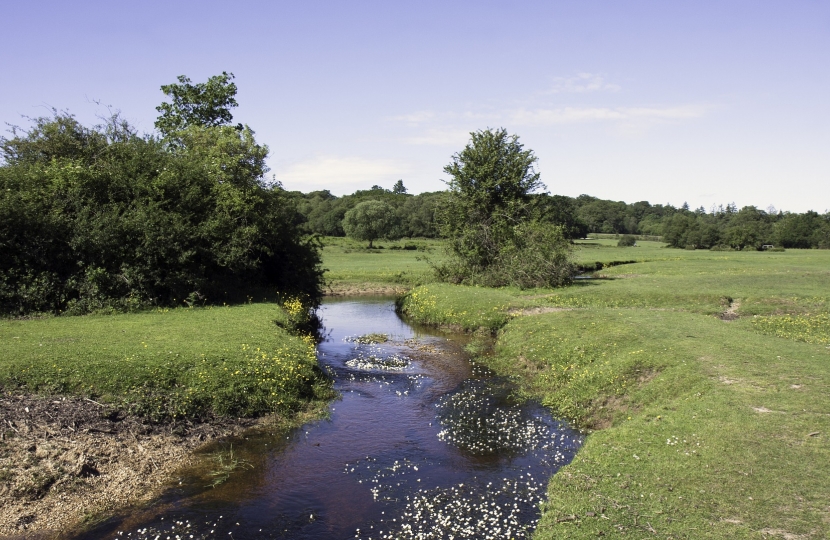 Anthony Browne, MP for South Cambridgeshire, has welcomed the creation of the Government’s Chalk Streams Working Group, to tackle the continued over-abstraction and water shortage problems faced in Cambridgeshire. It is part of a range of measures and initiatives that Mr Browne has been pushing for to help save the county’s threatened chalk streams.

Working with Water Resources East (WRE) and the Cam Valley Forum, Mr Browne has campaigned to raise concerns about local chalk streams, which produce incredibly clear flows from stores of underground water that are normally replenished when it rains.

Water abstraction, worsened by below-average rainfall and groundwater recharge over successive winters, has left many chalk streams running dry, as well as many of the village ponds in South Cambridgeshire. The streams are normally rich in wildlife, but low flows make them inhospitable for fish and other animals. With groundwater levels in the South East recently at record lows, Cambridgeshire’s chalk streams are at significant risk.

These fears prompted Mr Browne to write joint letters with WRE and the Cam Valley Forum to the water minister Rebecca Pow, with a number of detailed proposals to tackle the issue, including the creation of a Chalk Streams Working Group to drive action forwards. The letters were followed up by meetings with the water minister, government officials, and the Environment Agency.

There is now significant momentum on a number of policy fronts to protect chalk streams:

Local concerns have been exacerbated by an estimated 40% increase in water usage last summer due to COVID-19 restrictions on movement.

Commenting, Mr Browne said: “Our chalk streams are special habitats that are very rare, very beautiful, and very threatened, and form a well-loved part of the environment in South Cambridgeshire. I used to love playing in them as a child, and it would be unforgiveable if we didn’t preserve them for future generations. The Government’s fast action in creating the Chalk Streams Working Group is a great first step towards restoring these precious habitats.

It is fantastic that with the support of the government and its agencies that so much progress is being made so quickly in giving protection the chalk streams need. But housing growth and climate change make it an uphill struggle, and it will take quite a few years to have a noticeable impact. I will not stop fighting for our chalk streams until they are saved.”

He continued: “The next step is to ensure our area is classed as “water-stressed”, allowing the Environment Agency greater scope to work with water companies to tackle water consumption. This is vital if South Cambridgeshire continues to grow at the current rate.”

“I want to thank both Water Resources East and the Cam Valley Forum for their hard work, expertise and dedication on this issue. I will continue to work with them and alongside other MPs as a Vice Chairman of the All-Party Parliamentary Group for Chalk Streams.”

Robin Prince, Managing Director of Water Resources East, added: “Over the next three years Water Resources East will be co-creating a Regional Water Management Plan for Eastern England with stakeholders including water companies, local authorities, farmers and landowners, community and environmental groups and regulators. Like others, we understand that the high economic ambition that this area has cannot be delivered at the expense of the environment, particularly the iconic chalk stream landscape which surrounds the city of Cambridge.”

“Our role will be to bring all interested parties together to plan for the future, including planning for the major investment in new water infrastructure which will be required if this area is to meet its economic and environmental ambitions, particularly in the face of a changing climate.  This will take some time, and so the most immediate step that we can all take to preserve our precious chalk streams is to think carefully about how much water we use – everyone has a part to play in ensuring that none of this precious resource is wasted.”

Stephen Tomkins, Chairman of the Cam Valley Forum, added: “We greatly value Anthony Browne’s support in helping to find sustainable ways of meeting our water needs while protecting and restoring Chalk streams. These internationally-important natural assets must be safeguarded now and for the future.”

Column: Use every tool we have to cut carbon footprint

We are (almost) all committed to combatting climate change by achieving net zero greenhouse gas emissions by 2050, the UN-set target which is now enshrined in UK law. But that is different from achieving absolute zero emissions.