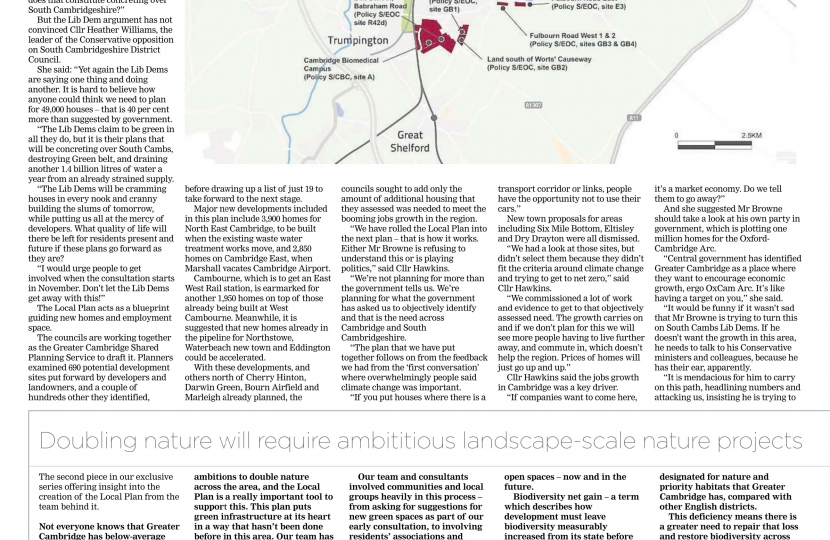 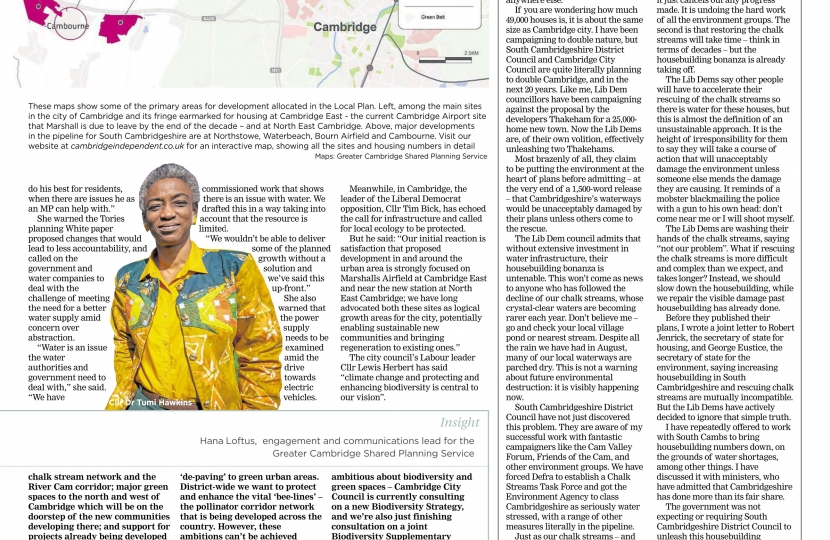 Budding spin doctors and magicians alike should study the Lib Dem’s Local Plan announcement last week for inspiration. In a press release about housebuilding, they fail to note the actual number of houses they propose to build (49,000), bury the news they will be building over the greenbelt and instead justify accelerating the housebuilding bonanza by inventing a methodology unused anywhere else.

If you are wondering how much 49,000 houses is, it is about the same size as Cambridge City. I have been campaigning to double nature, but South Cambs District Council and Cambridge City Council are quite literally planning to double Cambridge, and in the next twenty years. Like me, Lib Dem councillors have been campaigning against the proposal by the developers Thakeham for a 25,000 home new town. Now the Lib Dems are, of their own volition, effectively unleashing two Thakehams.

Most brazenly of all, they claim to be putting the environment at the heart of plans before admitting – at the very end of a 1,500 word release - that Cambridgeshire’s waterways would be unacceptably damaged by their plans unless others come to the rescue.

The Lib Dem council admits that without extensive investment in water infrastructure, their housebuilding bonanza is untenable. This won’t come as news to anyone who has followed the decline of our chalk streams, whose crystal-clear waters are becoming rarer each year. Don’t believe me – go and check your local village pond or nearest stream. Despite all the rain we have had in August, many of our local waterways are parched dry. This is not a warning about future environmental destruction: it is visibly happening now.

South Cambs District Council have not just discovered this problem. They are aware of my successful work with fantastic campaigners like the Cam Valley Forum, Friends of the Cam, and other environment groups. We have forced DEFRA to establish a Chalk Streams Task Force and got the Environment Agency to class Cambridgeshire as seriously water stressed, with a range of other measures literally in the pipeline.

Just as our chalk streams – and the wildlife that struggles to survive within them - have finally been given some hope, these proposals then crush it. All these extra houses require extra water, imposing even greater burdens on our aquifer, which already can’t cope. South Cambs and Cambridge City Councils know this is a problem, as their own independent report stated it clearly and recommended a lower growth scenario. Even the press release admits their plans would cause “unacceptable harm to the environment, including the region’s important chalk streams” - unless water companies and government sort out the mess they are causing.

There are two problems with this. The first is that this housebuilding bonanza clearly sets back restoring the chalk streams – it just cancels out any progress made. It is undoing the hard work of all the environment groups. The second is that restoring the chalk streams will take time – think in terms of decades – but the housebuilding bonanza is already taking off.  The Lib Dems say other people will have to accelerate their rescuing of the chalk streams so there is water for these houses, but this is almost the definition of an unsustainable approach. It is the height of irresponsibility for them to say they will take a course of action that will unacceptably damage the environment unless someone else mends the damage they are causing. It reminds of a mobster blackmailing the police with a gun to his own head: don’t come near me or I will shoot myself.  The Lib Dems are washing their hands of the chalk streams, saying: “not our problem.” What if rescuing the chalk streams is more difficult and complex than we expect, and takes longer? Instead, we should slow down the housebuilding, while we repair the visible damage past housebuilding has already done.

I have repeatedly offered to work with South Cambs to bring housebuilding numbers down, on the grounds of water shortages, amongst other things. I have discussed with ministers, who have admitted that Cambridgeshire has done more than its fair share. The Government was not expecting or requiring South Cambs District Council to unleash this housebuilding bonanza. This is an active decision by Liberal Democrats to build more houses than they need to – and let others sort out the environmental wreckage they will cause. South Cambs District Council loves to talk about their passion for the environment. But what matters is not their words, but their deeds.