Cambridge News Column - How much debt do you feel comfortable with? 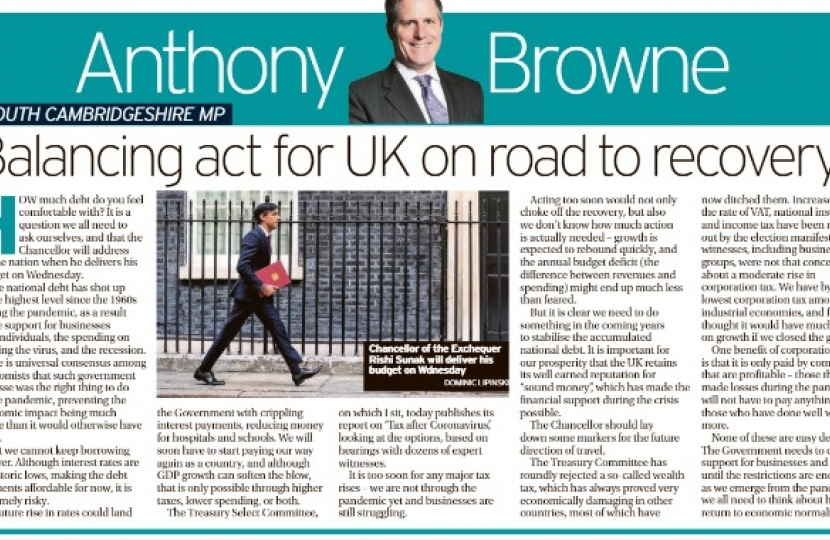 How much debt do you feel comfortable with? It is a question we all need to ask ourselves, and that the Chancellor will address for the nation when he delivers his budget on Wednesday. The national debt has shot up to the highest level since the 1960s during the pandemic, as a result of the support for businesses and individuals, the spending on tackling the virus, and the recession. There is universal consensus among economists that such government largesse was the right thing to do in the pandemic, preventing the economic impact being much worse than it would otherwise have been.

But we cannot keep borrowing for ever. Although interest rates are at historic lows, making the debt payments affordable for now, it is extremely risky. A future rise in rates could land the government with crippling interest payments, reducing money for hospitals and schools. We will soon have to start paying our way again as a country, and although GDP growth can soften the blow, that is only possible through higher taxes, lower spending, or both.

The Treasury Select Committee, on which I sit, today publishes its report on “Tax after Coronavirus”, looking at the options, based on hearings with dozens of expert witnesses. It is too soon for any major tax rises– we are not through the pandemic yet and businesses are still struggling. Acting too soon would not only choke off the recovery, but also we don’t know how much action is actually needed – growth is expected to rebound quickly, and the annual budget deficit (the difference between revenues and spending) might end up much less than feared.

But it is clear we need to do something in the coming years to stabilise the accumulated national debt. It is important for our prosperity that the UK retains its well earned reputation for “sound money”, which has made the financial support during the crisis possible. The Chancellor should lay down some markers for the future direction of travel. The Treasury Committee has roundly rejected a so-called wealth tax, which has always proved very economically damaging in other countries, most of which have now ditched them. Increases in the rate of VAT, national insurance and income tax have been ruled out by the election manifesto. Our witnesses, including business groups, were not that concerned about a moderate rise in corporation tax.  We have by far the lowest corporation tax among major industrial economies, and few thought it would have much impact on growth if we closed the gap. One benefit of corporation tax is that it is only paid by companies that are profitable – those that have made losses during the pandemic will not have to pay anything, while those who have done well will pay more.

None of these are easy decisions. The government needs to continue support for businesses and people until the restrictions are ended. But as we emerge from the pandemic, we all need to think about how we return to economic normality.