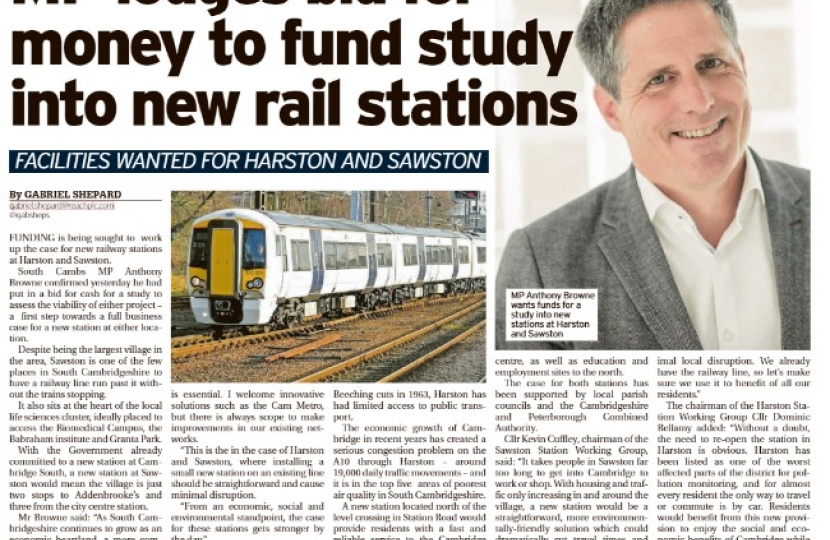 Anthony Browne, MP for South Cambridgeshire, has submitted two bids for funding to kick-start the process towards new railway stations for Harston and Sawston.

The bids, which require sponsorship from an MP to be submitted, have been put together with input from working groups in Sawston and Harston. The funding, which would pay for a transport and economic scoping study to assess the viability of any project, is the first step towards a full business case for a new station at either location.

Despite being the largest village in South Cambridgeshire constituency, Sawston is one of the few places in South Cambridgeshire to have a railway line run past it without the trains stopping. It also sits at the heart of the local life sciences cluster, ideally placed to access the Biomedical Campus, the Babraham Institute, and Granta Park. With the government already committed to a new station at Cambridge South, a new station at Sawston would mean the village is just two stops to Addenbrookes, and three from the City Centre station.

Since the station closed under the Beeching cuts in 1963, Harston has had limited access to public transport. The economic growth of Cambridge in recent years has created a serious congestion problem on the A10 through Harston - around 19,000 daily traffic movements - and it is in the top 5 areas of poorest air quality in South Cambridgeshire. A new station located north of the level crossing on Station Road would provide residents with a fast and reliable service to the Cambridge Biomedical Campus and the city centre, as well as education and employment sites to the north.

The case for both stations has been supported by local Parish Councils, Councillors and the Cambridgeshire and Peterborough Combined Authority, which has supported the process throughout. Mr Browne has also discussed the potential new stations with ministers, and he and the Working Groups have had discussions with Department for Transport officials.

Mr Browne commented: “As South Cambridgeshire continues to grow as an economic heartland, a more comprehensive public transport network is essential. I welcome innovative solutions such as the Cam Metro, but there is always scope to make improvements in our existing networks.

This is in the case of Harston and Sawston, where installing a small new station on an existing line should be straightforward and cause minimal disruption. From an economic, social and environmental standpoint, the case for these stations gets stronger by the day.

James Palmer, Mayor of the Cambridgeshire and Peterborough Combined Authority, said: “First-class public transport links are a key plank of my plans for sustainable, equitable economic growth across Cambridgeshire and Peterborough, and are the only way to reduce congestion and protect villages like Harston and Sawston. We’re happy to support communities that are looking at their local public transport and helping them find the solutions they need.

“Should this scheme progress, my transport team will work with the Parish Councils and Working Groups to ensure this scheme complies with our Local Transport Plan, and assist them engaging with Network Rail and other key stakeholders to help move this forward.”

Cllr Kevin Cuffley, Chairman of the Sawston Station Working Group, commented: “It takes people in Sawston far too long to get into Cambridge to work or shop. With housing and traffic only increasing in and around the village, a new station would be a straightforward, more environmentally friendly solution which could dramatically cut travel times and reduce pollution while causing minimal local disruption. We already have the railway line, so let’s make sure we use it to benefit of all our residents.”

Cllr Dominic Bellamy, Chairman of the Harston Station Working Group, commented: “Without a doubt, the need to reopen the station in Harston is obvious. Harston has been listed as one of the worst affected parts of the district for pollution monitoring, and for almost every resident the only way to travel or commute is by car. Residents would benefit from this new provision to enjoy the social and economic benefits of Cambridge while leaving their car behind.”

Anthony Browne, MP for South Cambridgeshire, is calling on the District Council to take over responsibility for parking enforcement from the Police, as surveys show the overwhelming majority of residents want a clamp down on illegal parking.