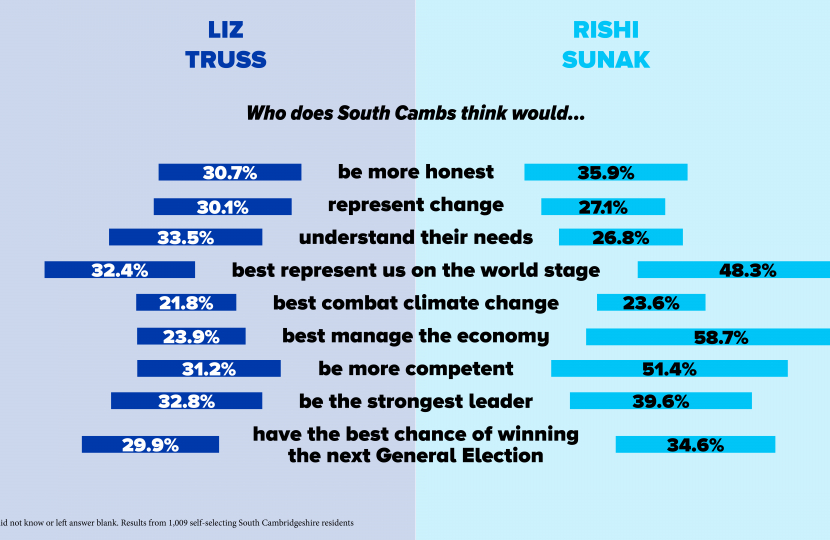 In a follow up to the snap poll of twelve candidates last month, Anthony asked constituents to make a choice between the two remaining candidates before asking a series of questions designed to understand local views in key areas such as leadership and competence.

When asked to choose which of the two remaining candidates they wanted for Prime Minister, 57 per cent of respondents from South Cambridgeshire chose Rishi Sunak, with 43 per cent favouring Liz Truss.

The poll was collected over the last four days via the MPs website, with 1,009 residents taking part.

Anthony Browne MP commented: “It is important to me that I represent South Cambridgeshire in this contest, which is why I have polled constituents in both stages of the race. In a whole number of fields, the residents of South Cambridgeshire have a clear preference for Rishi.

“While I have been very impressed by Rishi, having worked with him closely over the past two years, we have two excellent candidates for Prime Minister. Either of them will be able to restore trust in politics and promote sound government. Whoever takes the keys to Number 10 I am sure we will be able to work together in the best interests of South Cambridgeshire.”

Who do you want as next PM?

Between Liz Truss and Rishi Sunak, who do you think would:

be a stronger leader?

be the most competent as Prime Minister?

be able to run the economy effectively?

be more credible on climate change and net-zero?

best represent the UK on the world stage?

have the best chance of winning the next General Election?

be the most honest?

What do you think?