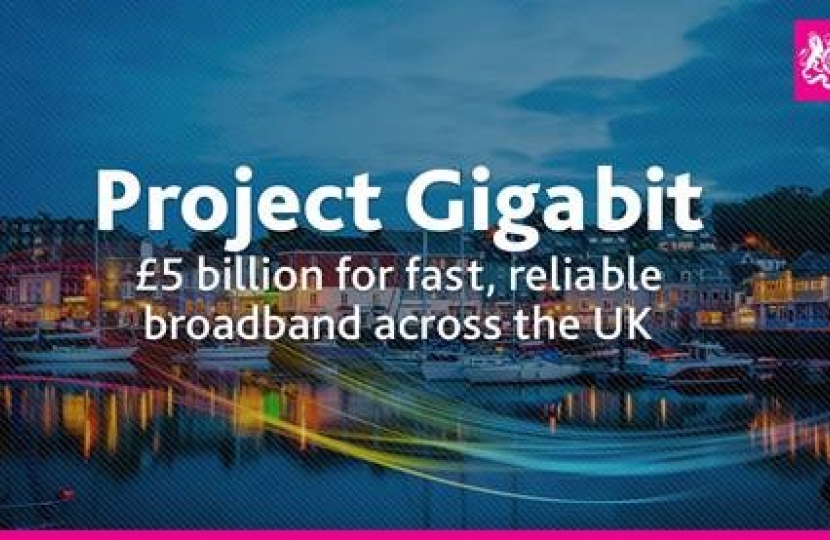 Anthony Browne, MP for South Cambridgeshire, has welcomed the announcement today of the launch of Project Gigabit, a new £5 billion government scheme to bring the fastest broadband on earth to hard-to-reach areas.

120,00 to 140,000 homes and businesses in Cambridgeshire will be amongst the first to benefit from having next-generation gigabit broadband built to them in the first phase of this major new government infrastructure project.

Their available speeds will rocket to more than 1,000 megabits or one gigabit per second. Contracts for these first areas will go to tender in the spring with spades in the ground in the first half of 2022.

The government-funded projects will prioritise areas that currently have slow connections and which would otherwise have been left behind in broadband companies’ rollout plans.  This is particularly relevant in South Cambridgeshire, according to Mr Browne’s South Cambridgeshire Development Survey. Over 550 respondents complained of still having poor broadband service, with signal speeds as low as 2 megabytes per second reported by some households.

Gigabit broadband is being rolled out rapidly - from one in ten households in 2019 to almost two in five today. The UK is on track for one of the fastest rollouts in Europe and for half of all households to have access to gigabit speeds by the end of this year.

Project Gigabit will accelerate our recovery from Covid-19, fire up high growth sectors like tech and the creative industries and level up the country, spreading wealth and creating jobs the breadth of Britain.

Mr Browne also welcomed the news that the successful Gigabit Broadband Voucher Scheme is being relaunched with a £210 million cash injection to give people in eligible rural areas immediate financial help to get gigabit speeds. He has previously worked with Connecting Cambridgeshire, who are responsible for tackling broadband and mobile signal issues across the county, to raise awareness of this scheme.

On top of this, the government is making up to £110 million available to connect public sector buildings - such as GP surgeries, libraries and schools - in the hardest to reach parts of the UK with this revolutionary infrastructure.

Anthony Browne MP commented: “For many of us, a good internet connection was something to savour over the course of the last twelve months. As well as a vital lifeline for business and education, it has been the only way to stay entertained, informed, and connected to friends and family.

“I very much welcome today’s announcements and the emphasis on finding those areas hardest to reach. There is a real divide in South Cambridgeshire, where it has become a postcode lottery to secure the best connection speeds. This programme is not only a step in the right direction, but a leap towards faster speeds for everyone -  the whole of Cambridgeshire will be able to live in the 21st Century.

“This can only enhance my continued campaign for better broadband and mobile phone signal, and I shall continue to work with the Government, service providers and Connecting Cambridgeshire to ensure everyone in our constituency has access to the services they need.

Digital Secretary Oliver Dowden said: “Project Gigabit is our national mission to plug in and power up every corner of the UK with the fastest broadband on earth.

“We have already made rapid progress, with almost 40 percent of homes and businesses now able to access next-generation gigabit speeds, compared to just 9 percent in 2019. Now we are setting out our plans to invest £5 billion in remote and rural areas so that no one is left behind by the connectivity revolution.

“That means no more battling over the bandwidth, more freedom to live and work anywhere in the country, and tens of thousands of new jobs as we unleash one of the biggest infrastructure upgrades in a generation.”