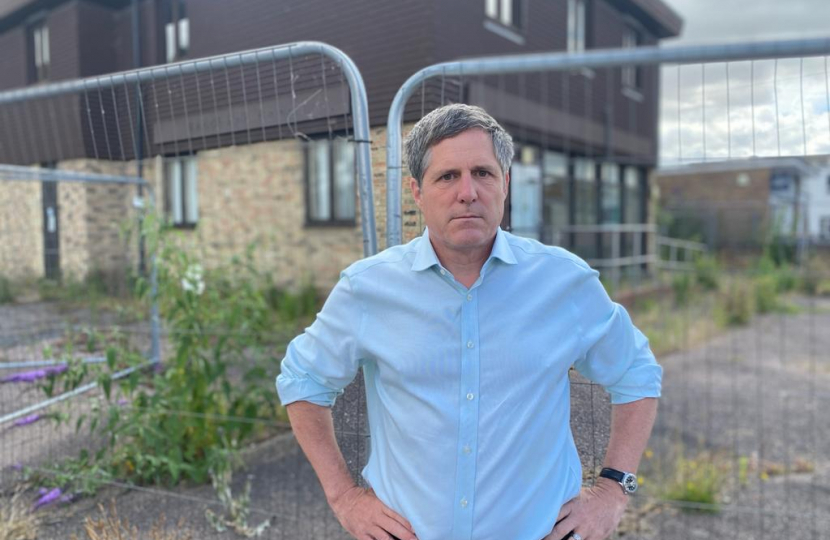 Anthony has welcomed the news that the former Barclays Bank site in Sawston is to be cleaned up and let in response to his campaign over the building’s state of disuse.

Anthony wrote directly to the overseas owners of the site (Stecki Investments Ltd) asking them to use or sell the property while seeking financial penalties should they fail to clean up the area.

As part of his campaign, Anthony also challenged the Leader of South Cambridgeshire District Council to act in cleaning up the site and submitted a question to the Secretary of State for Levelling Up, Housing and Communities to urge the Government to help local authorities to deal with such issues. Anthony also welcomed the actions of residents who, in support of Mr Browne’s efforts, urged local Councillors to act despite their previous neglect of the issue.

To ensure such situations do not arise again, Anthony is supporting measures such as High Street Rental Auctions to incentivise cooperation between landlords and local authorities, and the Register of Overseas Entities, which is being developed by the Department for Business, Energy, and Industrial Strategy to gather information on overseas landlords. The question and response can be found here.

On October 18th, he received a response from property consultants assuring residents that they are actively seeking to lease the site. A “to let” sign has already been erected at the premises, and the owners have promised to “look into” getting the weeds and bushes at the site cut back to "at least maintain some semblance of tidiness until the property is let".

Anthony commented: “I’m delighted my campaign has shocked everyone into action. The end is in sight – I’ll be keeping a close eye on the building and holding the letting agents to their promises. It is in everyone’s interest that this site be restored and let soon. Now, we can erase this blot from a thriving high street.”