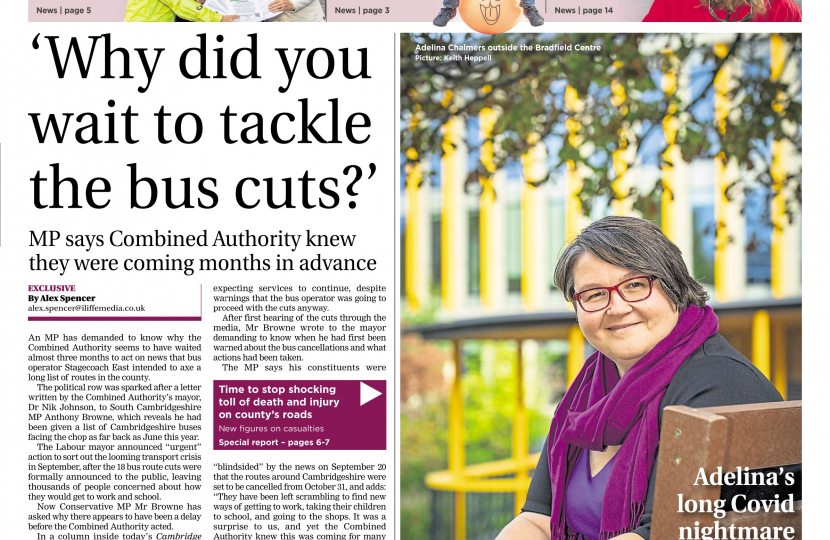 Anthony expressed shock at finding out the Mayor of Cambridgeshire and Peterborough knew about the coming Stagecoach East’s cuts to 18 of its bus services for over 100 days before acting to protect local bus services.

Anthony had written to the Mayor expressing his deep concern about the very consequences of the cuts, noting that many residents who depend on these services to go about their daily lives. He welcomed the Mayor’s public statements condemning Stagecoach East’s actions and the guarantee of an “urgent process” to address the crisis.  However, he also asked the Mayor to provide a comprehensive timeline of the Combined Authority’s contact with Stagecoach on this issue, and outline in more detail the steps he is taking to secure the future of the network.

In response, the Combined Authority admitted that they had known about the cuts to services since June. They then spent more than 100 days prevaricating before starting the “urgent process”, and there is no guarantee that anyone will pick up the routes.

I have offered to support the Mayor’s action in fixing the current situation, but I would not be able to stand behind a Combined Authority that did not learn the lessons from this debacle."

Mr Browne has previously expressed concerns about information being withheld from the public in crisis situations, such as when members of South Cambridgeshire District Council's Cabinet knew of reports about potential toxic water in some areas but chose not to make residents aware. When meeting with Stagecoach East, Mr Browne highlighted his frustration that many representatives, including himself, only heard the news when the story broke online.